EMR is honored to be completing another Harvey repair project. The 12 Elevators at the Republic Square I located within Houston’s strongest office markets are an addition to the newly renovated building.

The original 1979 building suffered greatly in 2016. The release of flood waters in Addicks & Barker Reservoir devastation the Energy Corridor during Houston’s 500-year flood.

The Republic Square I, caters to a workplace environment. The 12 traction elevators are designed for high speed travel and flexibility. The vertical transportation offers convenience and seamless movement throughout the entire facility including the covered garage.

EMR project team and modernization crews are excited to have been involved in such an inspiring space that is now open to be leased by any businesses looking for a great office work environment!

Check out more info below.

Prince of Peace Lutheran Church in Carrolton TX was a creative and joyful customer during their elevator modernization. EMR received much more than their business.

“The force is strong with you stair walker!”

Earlier this year EMR was hired by the church to perform a complete upgrade of their elevator controller, original machine and fixtures. It was their only elevator to the 750 students and 600 members. In MOST cases frustration is expected.

The project team notified the church of the lead time for proper accommodations. Without delay they went right to work to prepare. But not the way you would expect.

They first voted on a character of the ‘down elevator’. That’s how “Darth Elevator” was born! They designed posters and life-size stand ups of the character and promoted the the modernization with excitement.

Darth hung stood outside the elevator floors and stairs with catch phrases like, “the force is strong with you stairwalke”. They kept this up throughout the construction phase to remind everyone of the “elevator to come” The kids and adults loved Darth.

The first Sunday of the month, Pastor Micha Miller brought the life size Darth on stage to commence the elevators arrival by drop kicking the character in front of the whole congregation.  It was a delight for the entire church!

This unexpected great attitude during this down-time was inspiring.  It’s a good reminder that we could all prepare ourselves for a joyful heart during any season of life if we have the right attitude.

EMR Elevator has been a part of the ongoing restoration project for Houston’s Wortham Theater Center. Although the building is still recovering, parts of the theater will open to the public this Sunday for the first time since Hurricane Harvey devastated Houston. Repair work is still underway, but the show must go on!

The 31 year old landmark which is home to the renowned Houston Ballet and Grand Opera has been closed since the unprecedented storm hit the Houston area and sustained over 12 feet of water. On August 27, 2017 water filled the basement of the 437,000-sf structure. While the building was powered down before the worst of the storm, there was major damage to the building’s mechanical and electrical equipment including the vertical transportation. 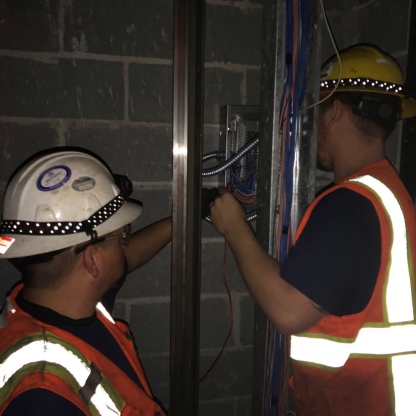 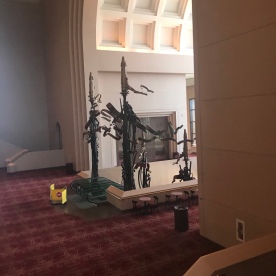 EMR’s highly skilled elevator mechanics and adjustors worked tirelessly to focus on repairing 12 of the building’s elevators & escalators. The iconic venue relies highly on the use of their transportation for the ongoing construction to complete the project on time and for opening their doors permanently. 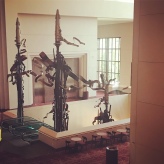 Paley Sculptures
The Paley Sculptures are decorative, ribbon-like sculptures flowing gracefully on either side of the Wortham Center front entrance escalators. These magnificent stairway sculptures, mark the artist’s first use of color in his steel sculpture work. Collectively, the Stairway Sculptures weigh 30 tons. Some of the individual pieces of art have as many as 400 pieces of steel. Albert Paley, the American artist, completed the sculpture in 1987. 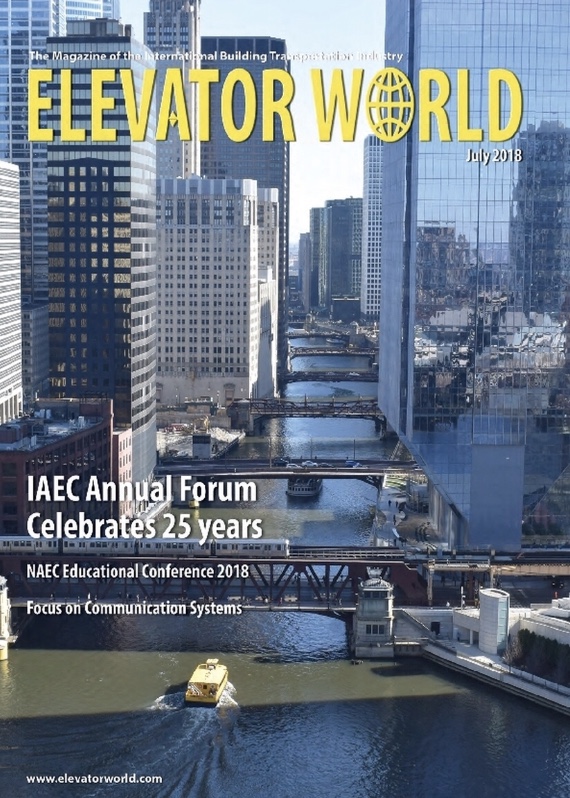 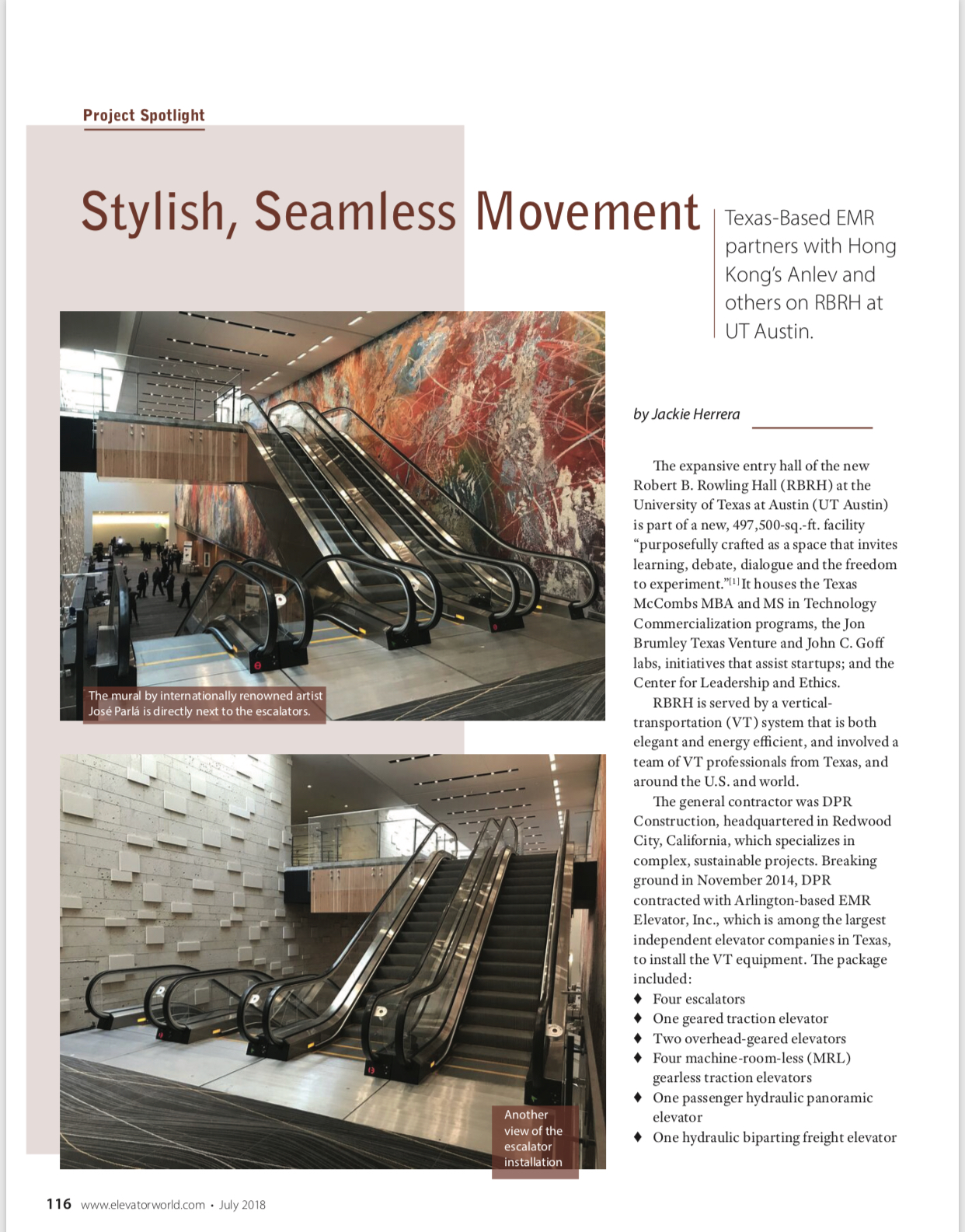 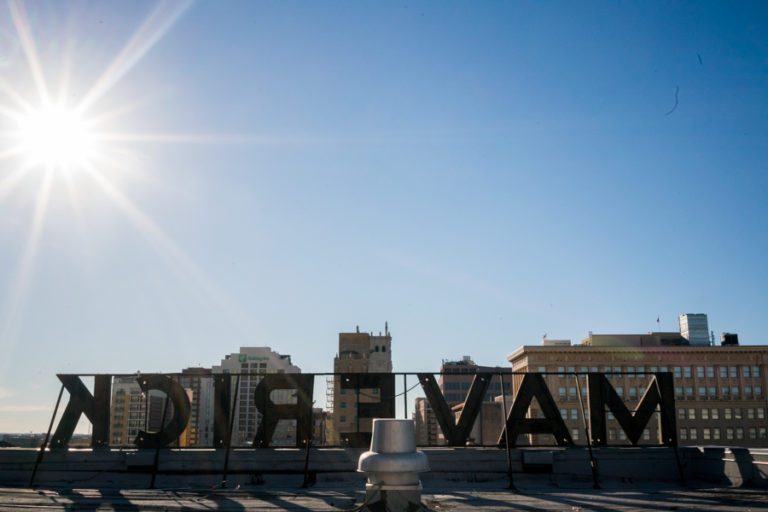 EMR Elevator was included in the historical Maverick building project in San Antonio TX. The elevators were one of the many upgrades completed to accommodate the 86 newly renovated apartments.

The city partnered with AREA Real Estate to have the Maverick  become part of San Antonio’s goal of increasing the downtown housing portfolio, especially affordable housing options in the urban core. The city invested nearly $1 million into the reconstruction.

A storied landmark on the National Register of Historic Places. Designated for it’s exceptional significance in American history. The project was awarded to the region’s leading GC in South Texas, GW Mitchell Construction, known for building and renovating landmarks for over 90 years. 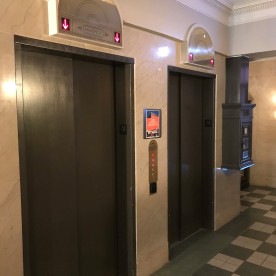 The hallway position indicators were manufactured by Innovation which were inspired by the original dial floor indicators. Each step of this 9-story modernization project was handled with extreme care and caution.

The original designer was world-renowned architect Lou Harrington who opened the downtown office building in 1922. The Highrise is named after its original owner and builder, George Maverick who was the son of Samuel Maverick, one of the signers of the Texas Declaration of Independence. Mr. Maverick built the Highrise on the site of the old Maverick Hotel which was also once the San Antonio Military Headquarters until 1881.

The Maverick of today is historically preserved, newly renovated luxury apartments located downtown San Antonio only steps away from the most visited tourist attractions and beautifully landscaped Riverwalk which features the spectacular hotels, restaurants, night clubs, bars, shopping and businesses. Today the Maverick Building has a new look and purpose. 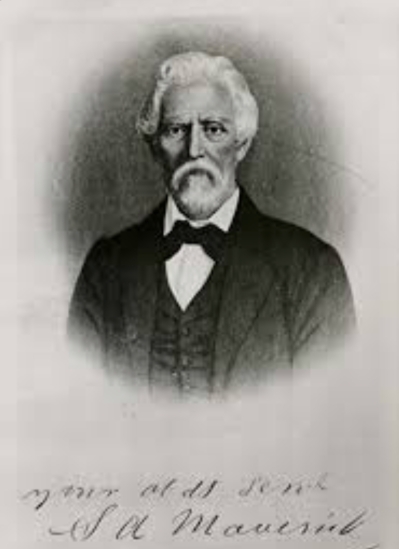 Samuel Augustus Maverick (July 23, 1803 – September 2, 1870) was a Texas lawyer, politician, land baron and signer of the Texas Declaration of Independence. His name is the source of the term “maverick,” first cited in 1867, which means “independently minded.”

Samuel Augustus Maverick (1803 – 1870) was a Texas lawyer, politician, land baron and signer of the Texas Declaration of Independence. His name is the source of the term “maverick,” first cited in 1867, which means “independently minded.”

Maverick settled in San Antonio, Texas and established himself as a businessman involved in real estate and ranching. He was also active in public life, serving as mayor of San Antonio, a representative in the Congress of the Republic of Texas and the state legislature, and chief justice of Bexar County.

The beautiful 1950’s Heights building originally developed  for Southwestern Bell was the historical structure that once housed, switchboards, operators and crank telephones. 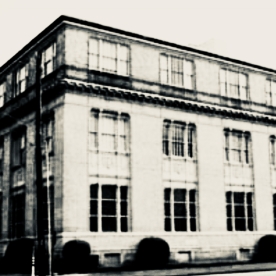 The high-end development was a residential product of Röhe & Wright builders. Known for their timeless architecture and sought after neighborhoods. They purchased the three story property and quickly began working on the luxurious transformation.

EMR was honored to be awarded the vertical transportation portion of this high-end project. The scope consisted of demolishing the three-story elevators and modernizing everything from elevator controllers to cabs.

The swift elevator controllers were replaced by California Manufacturer (EC), who provided their latest pixel controllers. The easy design made the installation quick and seamless.

The builders focused the architectural style on preserving the history of the building while creating modern features and structural support required. 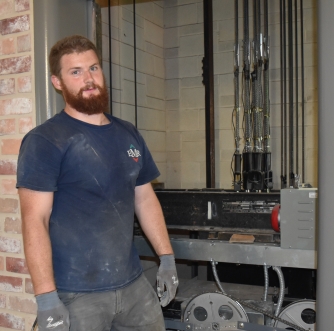 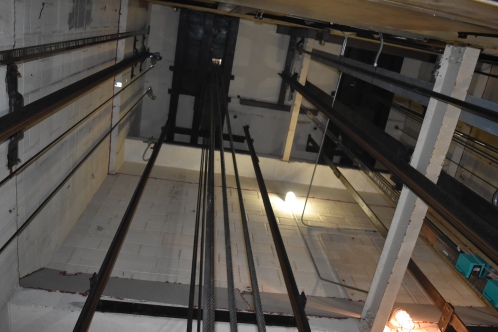 The elevator’s overall esthetic looks were inspired by the appreciation of the original building’s unique cab design. The antique cab shells were modernized by C. Lindsey Designs of Texas. The designers were successful in reclaiming the original materials. The curved shell and nickel silver trim was carefully refinished to recover the classic elevator features.

The UT community gathered last night for the grand opening of Rowling Hall and lit up the skies over campus and Austin last night. A great cause for celebration!

Grand Opening of the Robert B. Rowling Hall was a success! The construction teams and project managers on this project have continued to work on the elevators and escalators to help show off the building to all the friends and donors at McCombs School of Business. Our teams showed up in their best to enjoy the festivities and run the glass elevators for Mr Robert Rowling himself!

EMR proudly accepted praises for their support and continued efforts at RBRH and all of their UT projects. 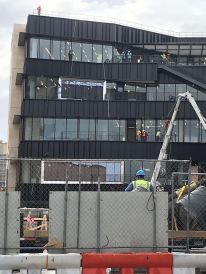 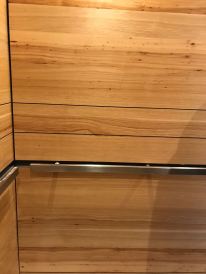 The cutting edge building designed by Ennead Architects and Jacobs Engineering, managed by DPR is coming together nicely.

Construction plans on the future site of the Texas MBA, Rowling Hall, began fall 2014. The new building, next to the AT&T Executive conference center on the west side of the UT-Austin campus, is projected to open this year. Rowling Hall will be the “launch pad” for projects between the school’s students & alumni, and the wider Austin community. The vertical transportation installed by EMR Elevator’s open hoistways are a stand-out feature of this building. These Motion Control Elevators are a innovative product heritage – non-proprietary, serviceable and maintainable elevator customized specifically for the building’s design and high-traffic use.

Check back with us to see updates on this project.

EMR traveled to the Midwest to MEI (Minnesota Elevator Inc.) manufacturing facility. The construction teams participated in the training at the MEI corporate office in Mankato Minnesota where they received in-depth training instructions on the products and manufacturers MEI supports.

MEI specializes in custom built elevators throughout the world. Each elevator produced by MEI is individually engineered.  The customized full elevator packages are being installed at UT Southwestern Medical Center by EMR Elevator.

There’s a reason why the manufacturer train the installers. MEI delivers versatile learning and support of their manufactured equipment and educates the installers to increase product quality from engineering to installation. Training and support gives the next generation of installers a heads up on the newer non-proprietary equipment engineered for the ever-changing industry. The training administrators are given the tools to provide the entire learning process, from baseline knowledge to hands-on. The course provides the behind-the-scene operation and engineering tools to successfully install MEI equipment. The construction team will carry the knowledge and experience with them throughout their careers. 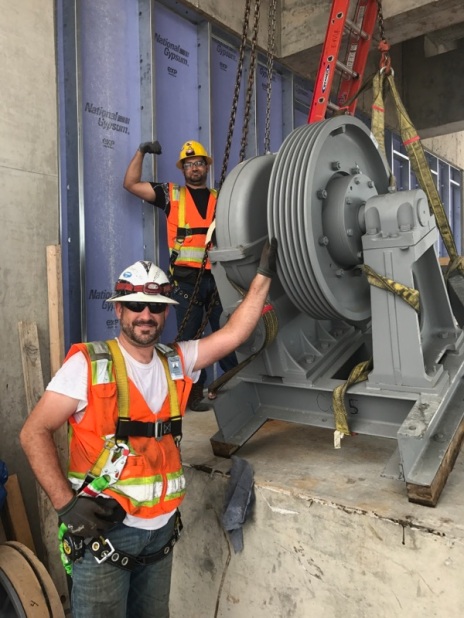 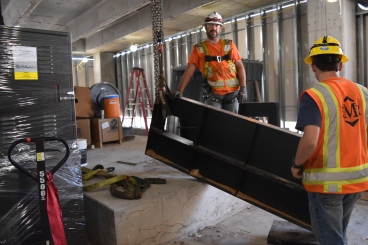 EMR construction in Dallas is proud to be awarded another leading Vaughn Construction project for The University Texas Southwestern Medical Center.

Renovations and upgrades are taking place in six different buildings on campus and cover an additional 37,000 SF space!
The vertical transportation scope consist of multi-level structures for the installation of 10 Motion Control Elevators. The MCE non-proprietary manufacturer, customized each state-of-the-art controller for this project.
EMR’s project management and construction team work together to meet the general contractor’s needs for UTSW.

EMR’s Vice President Larry Evans who was born and raised in DFW says, “I remember the major construction of Parkland Memorial Hospital back in the early 80’s when it was the primary teaching institution for UT. This construction project serves the past and present of DFW. It’s a great honor for everyone involved”

As Mr. Evans states, there is a great history behind this grand medical complex.

It started back in 1943 after Baylor moved from Dallas to Houston. The Southwestern foundation was determined that DFW should continue to have a medical school. So, classes and laboratories were setup in temporary army barracks behind the old parkland hospital.

This historic facility has little resemblance of the tiny wartime medical college launched in the army barracks back in the 1940’s.

The growth is directly contributed to the work of thousands of dedicated physicians, nurses and world-renowned researchers.
EMR is proud to contribute to this major economic impact that UTSW has added to North Texas. In fact, each dollar spent by UT Southwestern generates more than $2 additionally for the local economy.

Interesting facts:
– The original hospital opened in 1894 in a wooden building on a 17-acre meadow located at Oak Lawn Avenue and Maple.

– The name Parkland came from the land on which the hospital was built, originally purchased by the city as a park.

– Parkland hospital was the medical center that treated our President John F. Kennedy and Texas Governor John Connally after they were assassinated in Dallas 1963.